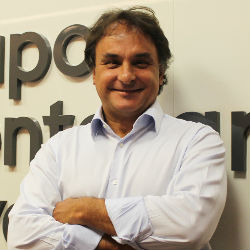 Brazilian businessman Ricardo Tavares is the president of Montesanto Tavares Group. He started in the coffee industry at 18 years old and at age 22 he was part of a family business, Café Três Corações, which was sold in 1999 to the Israeli company Strauss.

After the sale of Café Três Corações, he started Sucos Mais, products that have always been among the market leaders. Soon there was interest from the Coca-Cola group to buy the brand, which was sold in 2005.

Today there are five farms producing Arabica coffee, five warehouses for storage and processing of coffee, a transport company, and four trading companies, as well as Ally Coffee, focusing on specialty coffee.

He saw the possibility of joining in one business the two main products of the companies: coffee and African mahogany. The first crops produced the award-winning Mahogany Coffee.

The Group companies maintain the Institute Café Solidário, a social project with several courses for 147 children 7-17 years and community mothers in one of the poorest municipalities in Brazil.