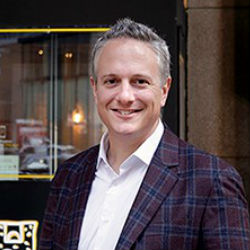 Previously, during his 14-year tenure at Starbucks, Doug was a key architect of growth, leading teams that helped increase store counts from 2,000 to 20,000 globally. He last served as Senior Vice President of Business Development & License Retail Operations for Europe, Middle East and Africa, where he directed P&L responsibilities in excess of $1 billion and played an integral role in innovation and multi-channel growth.

Satzman recently returned from a one-year sabbatical where he worked with young entrepreneurs and sponsored philanthropic projects in Rwanda. He now lives in New York with his wife, Heather, and two children. He enjoys spending his spare time with his family, exploring wholesome foods, running and traveling.