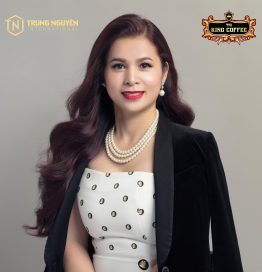 Known as the Coffee Queen of Vietnam, Le Hoang Diep Thao is the one who laid the cornerstone of Trung Nguyen coffee empire – the largest coffee corporation in Vietnam and a highly-acclaimed national brand. Thao and Trung Nguyen have brought Vietnamese coffee to the whole world, unlocking numerous business and job opportunities for millions of people.

Le Hoang Diep Thao is now the CEO of Trung Nguyen International (TNI). She is also the co-founder and co-owner of Trung Nguyen Group (TNG) – a proud national brand of Vietnam. Over the past 20 years, Thao has proven herself as a bold thought leader whose strategic decisions have boosted Trung Nguyen’s growth as the No.1 coffee brand in Vietnam and one of the largest coffee makers in Asia.

On her journey of celebrating quality coffee, Diep Thao is committed to bringing Vietnamese coffee to the world and this has been her ultimate mission during the past 20 years. To fulfill this mission, Thao not only focuses on expanding global distribution network to promote Vietnamese coffee worldwide but also determines to transform the coffee market and “raise the voice of a strong coffee nation”.

G7 – a signature instant coffee brand enjoyed by more than one billion people in 60 countries and territories worldwide – is a remarkable success to Thao, who decided to start the instant coffee business of Trung Nguyen Group in 2003.

In 2016, Diep Thao launched her own coffee brand dubbed King Coffee in the US. Just two years after the debut, King Coffee has made its presence in 61 countries and territories globally, including highly demanding markets like China, Russia, South Korea, Australia, France, Singapore, etc. With King Coffee, Thao empowers Trung Nguyen International to write the next chapters that complete the legend of Trung Nguyen.

In 2018, Trung Nguyen International materializes its ambitious plan of opening over 1,000 King Coffee stores and developing a global franchising coffee chain with the debut of the most high-end coffee chain in Vietnam.

One of the CEOs that have substantial influence in Vietnamese coffee industry, Diep Thao always keeps in mind the crucial role of coffee farmers and wants to make sure the farmers get all the resources they need to have a better life and a brighter future. And Happy Farmers – Trung Nguyen International’s flagship CSR program – has been implemented to provide incentives that promote the sustainable development of coffee farmers through improving their quality of life, enhancing their knowledge, and supporting them to shift to new cultivation models that yield high productivity.