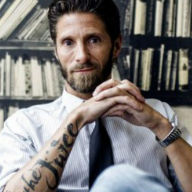 Kaspar Basse is son of the former Director of Magasin Jørgen Basse and Anne-Lise Basse, who was a top saleswomen in IBM and one of the first business women to raise new standards in Denmark.

Kaspar is educated at Copenhagen Business School and had a wish of being an entrepreneur before he turned 30 years old.  He became that, when he started the web bureau Magnetix, but just for a short period. Later, he started JOE & THE JUICE in the centre of Copenhagen in 2002.

Kaspar had always been practicing a lot of sport and was for a long time a fighter for the Danish National team in Karate.  Because of that, Kaspar was always very focused on nutrients and vitamins, but he found it very hard to consume all the right vegetables and fruit.  It was also based on this issue and his great inspiration of Starbucks that helped him build JOE & THE JUICE.  He wanted to build a place where you could get a healthy meal, but in cool and funky surroundings and at the same time a place where you wanted to spend your time with friends and family.

To begin with, Kaspar was working behind the bar himself, but within time he gave that job to his employees and since then, he has opened store after store and been very focused on building up the brand.

In 2013 Kaspar decided it was time for JOE & THE JUICE to expand even more, so with 49 stores at that time, he brought in Valedo Partners as part owner of the company in November 2013.